The standard deviation is similar to the mean deviation in that here too the deviations are measured from the mean.

Before defining the concept of the standard deviation, we introduce another concept viz. variance.

Where s2 (called sigma squared) is used to denote the variance.

Although the variance is a measure of dispersion, the unit of its measurement is (points). If a distribution relates to income of families then the variance is (Rs)2 and not rupees.

In applied Statistics, the standard deviation is more frequently used than the variance. This can also be written as:

We use this formula to calculate the standard deviation from the individual observations given earlier. 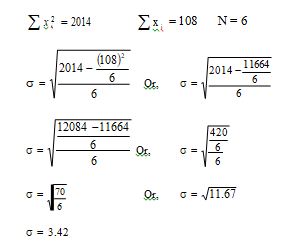 The following distribution relating to marks obtained by students in an examination:

In the case of frequency distribution where the individual values are not known, we use the midpoints of the class intervals. Thus, the formula used for calculating the standard deviation is as given below:

Where mi is the mid-point of the class intervals m is the mean of the distribution, fi is the frequency of each class; N is the total number of frequency and K is the number of classes. This formula requires that the mean m be calculated and that deviations (mi -μ) be obtained for each class. To avoid this inconvenience, the above formula can be modified as:

Where C is the class interval: fi is the frequency of the ith class and di is the deviation of the of item from an assumed origin; and N is the total number of observations.

Applying this formula for the table given earlier,

When it becomes clear that the actual mean would turn out to be in fraction, calculating deviations from the mean would be too cumbersome. In such cases, an assumed mean is used and the deviations from it are calculated. While mid- point of any class can be taken as an assumed mean, it is advisable to choose the mid-point of that class that would make calculations least cumbersome. Guided by this consideration, in Example 3.7 we have decided to choose 55 as the mid-point and, accordingly, deviations have been taken from it. It will be seen from the calculations that they are considerably simplified.

Uses of the Standard Deviation

The standard deviation is a frequently used measure of dispersion. It enables us to determine as to how far individual items in a distribution deviate from its mean. In a symmetrical, bell-shaped curve:

The standard deviation is an absolute measure of dispersion as it measures variation in the same units as the original data. As such, it cannot be a suitable measure while comparing two or more distributions.

In a small business firm, two typists are employed-typist A and typist

Typist A types out, on an average, 30 pages per day with a standard deviation of 6.

Typist B, on an average, types out 45 pages with a standard deviation of 10. Which typist shows greater consistency in his output? 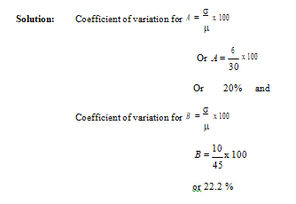 These calculations clearly indicate that although typist B types out more pages, there is a greater variation in his output as compared to that of typist A.

We can say this in a different way: Though typist A's daily output is much less, he is more consistent than typist B. The usefulness of the coefficient of variation becomes clear in comparing two groups of data having different means, as has been the case in the above example.

The variable Z = (x - x )/s or (x - m)/m, which measures the deviation from the mean in units of the standard deviation, is called a standardised variable.

Since both the numerator and the denominator are in the same units, a standardised variable is independent of units used. If deviations from the mean are given in units of the standard deviation, they are said to be expressed in standard units or standard scores.

Through this concept of standardised variable, proper comparisons can be made between individual observations belonging to two different distributions whose compositions differ.

A student has scored 68 marks in Statistics for which the average marks were 60 and the standard deviation was 10.

In the paper on Marketing, he scored 74 marks for which the average marks were 68 and the standard deviation was In which paper, Statistics or Marketing, was his relative standing higher?

The standardised variable Z = (x - x ) ¸ s measures the deviation of x from the mean x in terms of standard deviation s.

Since the standard score is 0.8 in Statistics as compared to 0.4 in Marketing, his relative standing was higher in Statistics. 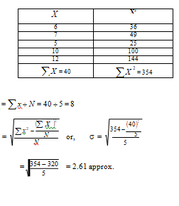 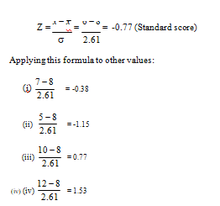