Structure of the Foreign Exchange Market 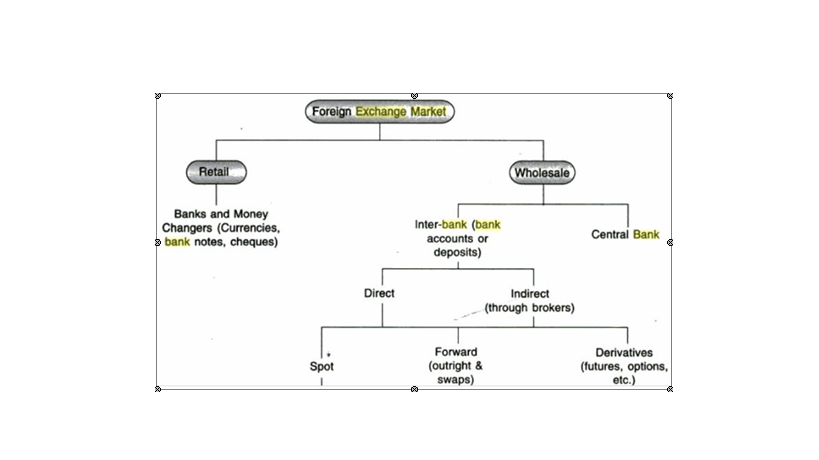 The wholesale market comprises of commercial banks and investment banks. This is broadly classified as inter-bank market and central bank market.

Wholesale banking typically involves a small number of very large customers such as large corporate and governments, Wholesale banking is largely interbank: banks use the inter -bank markets to borrow from or lend to other banks, to participate in large bond issues, and to engage in syndicated lending.

The interbank network consists of a global network of financial institutions that trade currencies between each other to manage exchange rate and interest rate risk. The largest participants in this network are private banks.

Most transactions within the interbank network are for a short duration, anywhere between overnight to six months. The interbank market is not regulated.

Within the fields of trading and finance, a derivative is considered to be an instrument used for investment via a contract. Its value is "derived" from (or based upon) that of another asset, typically referred to as the underlying asset or simply "the underlying." In other words, a derivative contract is an agreement that allows for the possibility to purchase or sell some other type of financial instrument or non-financial asset. Common types of derivative contracts include options, forwards, futures and swaps.

The foreign exchange brokers function as a link between the central bank and the commercial banks and also between the actual buyers and commercial banks. They are the major source of market information. These are the persons who do not themselves buy the foreign currency, but rather strike a deal between the buyer and the seller on a commission basis.