The OSI model is shown in the figure. This model is based on a proposal developed by the International Standards Organization (ISO) as the first step towards international standardization of the protocols used in the various layers, (Day & Zimmerman, 1983). The model is called the ISO OSI (Open Systems Interconnection) Reference Model because it deals with connecting open systems, i.e., the systems that are open for communication with other systems.

The OSI Model has seven layers. The principles that were applied to arrive at the seven layers are as follows. 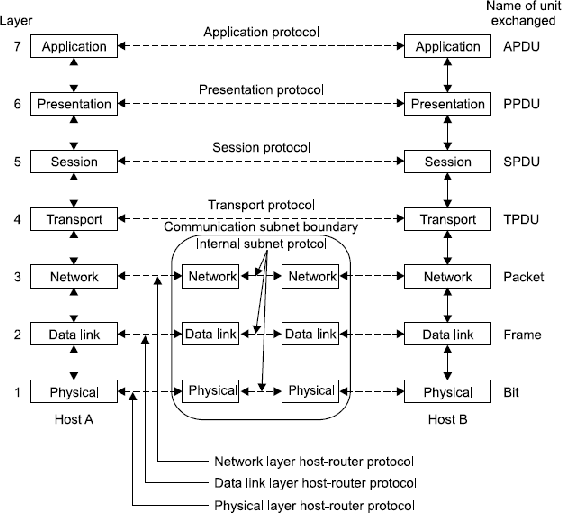 Mechanical: Relates to the physical properties of the interface to a transmission medium. Typically, the specification is of a pluggable connector that joins one or more signal conductors, called circuits.

Electrical: Relates to the representation of bits (e.g., in terms of voltage levels) and the data transmission rate of bits. It defines the voltage, current, modulation, bit synchronization, connection activation and deactivation, and various electrical characteristics for the transmission media (such as unshielded or shielded twisted-pair cabling, coaxial cabling, and fiber-optic cabling).

Functional: Specifies the functions performed by individual circuits of the physical interface between a system and the transmission medium.

Procedural: Specifies the sequence of events by which bit streams are exchanged across the physical medium.

The physical layer provides only a raw bit-stream service, the data link layer attempts to make the physical link reliable while providing the means to activate, maintain, and deactivate the link. For LANs, the Project 802 standards of the Institute of Electrical and Electronics Engineers (IEEE) separate the data-link layer into two sub-layers:

Examples of data-link protocols for local area networking include the following:

The network layer is responsible for functions such as the following:

The transport layer is responsible for providing reliable transportation services to the upper-layer protocols. These services include the following:

The connection between two devices that acts as though it's a direct connection even though it may physically be circuitous. The term is used most frequently to describe connections between two hosts in a packet-switching network. In this case, the two hosts can communicate as though they have a dedicated connection even though the packets might actually travel very different routes before arriving at their destination. An X.25 connection is an example of a virtual circuit. Virtual circuits can be either permanent (called PVCs) or temporary (called SVCs).

Layer 5 of the Open Systems Interconnection (OSI) reference model, enables sessions between computers on a network to be established and terminated. The session layer does not concern itself with issues such as the reliability and efficiency of data transfer between stations because these functions are provided by the first four layers of the OSI reference model.

Dialog control: The session layer allows two systems to enter into a dialog. It allows the communication between two processes to take place in either half-duplex (one way at a time) or full-duplex (two ways at a time) mode.

Synchronization: The session layer allows a process to add checkpoints, or synchronization points, to a stream of data. For example, if a system is sending a file of 2000 pages, it is advisable to insert checkpoints after every 100 pages to ensure that each 100-page unit is received and acknowledged independently. In this case, if a crash happens during the transmission of page 523, the only pages that need to be resent after system recovery are pages 501 to 523. Pages previous to 501 need not be resent.

The presentation layer is concerned with the syntax and semantics of the information exchanged between two systems.

Specific responsibilities of the presentation layer include the following:

Encryption: To carry sensitive information, a system must be able to ensure privacy. Encryption means that the sender transforms the original information into another form and sends the resulting message out over the network. Decryption reverses the original process to transform the message back to its original form.

Compression: Data compression reduces the number of bits contained in the information. Data compression becomes particularly important in the transmission of multimedia such as text, audio, and video.

Layer 7 of the Open Systems Interconnection (OSI) reference model, in which network-aware, user-controlled software is implemented—for example, e-mail, file transfer utilities, and terminal access. The application layer represents the window between the user and the network. Examples of protocols that run at the application layer include File Transfer Protocol (FTP), Hypertext Transfer Protocol (HTTP), telnet, and similar protocols that can be implemented as utilities the user can interface with.