Theories of Learning in Psychology

Theories of Learning in Psychology are

Behavioristic theory to the school behaviorism. They interpret learning in terms of association between stimulus and responses (S-R). Under these categories we may include theories like trial and error, classical-conditioning and operant.

Cognitive theories belongs to t he school of Gestalt psychology and cognitive psychology. These theories emphasize the role of insight under stand and other cognitive factors in the process of learning. Under the category of this theory like theory of insightful learning, Tolman sign learning theory etc.

Cognitive approaches to learning consider learning in terms of thought processes, or cognition.

a) Trial and error learning theories:

The famous psychologist Edward L. Throndike (1974-1949) is known as the founding father of the theory trial and error learning. It is the result of this experiment performed on chicken, rat, and cat. He put a hungry cat in a puzzle box. There was only one door for exit, which could be open by currently manipulating a latch fish was placed outside the box. The smell of this fish worked as the strong nature for the hungry to come out the box. Thorndike devised this puzzle box to study the process by which a cat learns to press a paddle to escape from the box and receive food. He believed that over time and through experience the organism would make a direct connection between the stimulus and the response without any awareness that the connection existed.

b) Classical - Conditioning learning and its application:

Classical conditioning is a type of learning in which a neutral stimulus comes to bring about a response after it is paired with a stimulus that naturally brings about that response.

A stimulus that naturally brings about a particular response without having been learned.

A response that is natural and needs no training.

A stimulus that, before conditioning, does not naturally bring about the response of interest.

Stimulus to bring about a response formerly caused only by the conditioned stimulus.

Response that, after conditioning, follows a previously neutral stimulus. 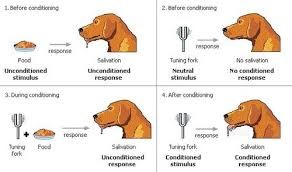 The basic process of classical conditioning:

We can say that conditioning has been accomplished: The previously neutral stimulus of the bell is now considered a conditioned stimulus that brings about the conditioned response of salivation.

(For response and stimulus, motivation is important).

Latent learning: a new behavior is learned but not demonstrated until some incentive is provided for displaying it.

Observational learning: learning by observing the behavior of another person, or model.

Cognition is the process of acquiring knowledge through our thought, experiences and sense. Cognitive learning theory is a broad theory that explaining thinking and mental processes and how they are influence by internal and external factor in order to produce learning in human. Cognitive learning is concern with acquisition of problem-solving abilities and with intelligence and conscious thought.

The cognitive learning explains why the human brain is the most important network of information processing and interpretation in the body as we learn things. This theory can be divided into two specific categories: