The types of communication can be categorized under three major heads;

A. Methods of communication

The choice of a particular method for a particular purpose depends upon the audience, the nature of message, and costs involved. Very often the methods are combined together. These various methods are;

In general, it is least expensive, least time consuming, is more direct and simple.

There is no formal record, so it lacks proof and may generate conflict.

It is another most widely used method of communication. It is most comprehensive type. It is generally done in the form of instructions, memos, letters, reports etc. it is used to give, receive and record information.

It is formal, authoritative and serves as an evidence of events and activities.

In general, it is time consuming and costly.

According to William Shakespeare, “There is a language in her eye, her cheek, her lip, Nay her foot speaks. Her wanton spirits look out at every joint and motive of her body”.

Based on the direction of flow or channels used communication can be of four types: upward, downward, horizontal, and diagonal or lateral. 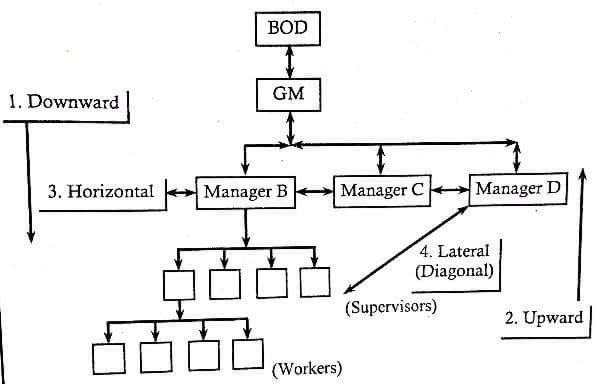 It represents the flow (initiation) of information from the top level to the lower level of the organization to give specific task, job instructions and others.

This method of communication is use to encourages employees to participate in decision making process and submit valuable ideas and suggestions.

It refers to the transmission of information among positions of the same level. It is more of an informal nature.

The flow of information is between people who are not at the same level in the organization.

A communication network consists of the paths over which communication travels among people. It is simply a diagram showing all communication patterns or relationships that are possible within a group or among individuals. 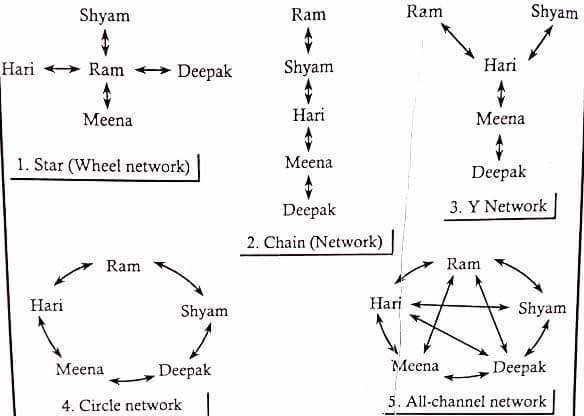 It refers to the communications which are institutionally determined by the organization. There can be many numbers of formal networks as shown in figure:

It is the most centralized network. All communication passes through central authority-like the hub of a wheel. The workers do not communicate with each other.

Information flows only upward or downward in a hierarchical chain of command.

Two subordinates report to the manager and then manager passes to two superior.

Here, the information moves in a circle i. e. each person can communicate with his/her two neighborhood colleagues.

Here, every member in the group is free to communicate with any member. Here, no restriction on the flow of information.

The informal communication networks in the organization are used by informal groups who develop and maintain contract for informal exchange of information. They involve flow of rumors through grapevine.

The types of grapevine can be: