Correlation Analysis is a statistical technique used to indicate the nature and degree of relationship existing between one variable and the other(s). It is also used along with regression analysis to measure how well the regression line explains the variations of the dependent variable with the independent variable.

The commonly used methods for studying linear relationship between two variables involve both graphic and algebraic methods. Some of the widely used methods include:

This method is also known as Dotogram or Dot diagram. Scatter diagram is one of the simplest methods of diagrammatic representation of a bivariate distribution. Under this method, both the variables are plotted on the graph paper by putting dots. The diagram so obtained is called "Scatter Diagram". By studying diagram, we can have rough idea about the nature and degree of relationship between two variables. The term scatter refers to the spreading of dots on the graph. We should keep the following points in mind while interpreting correlation: 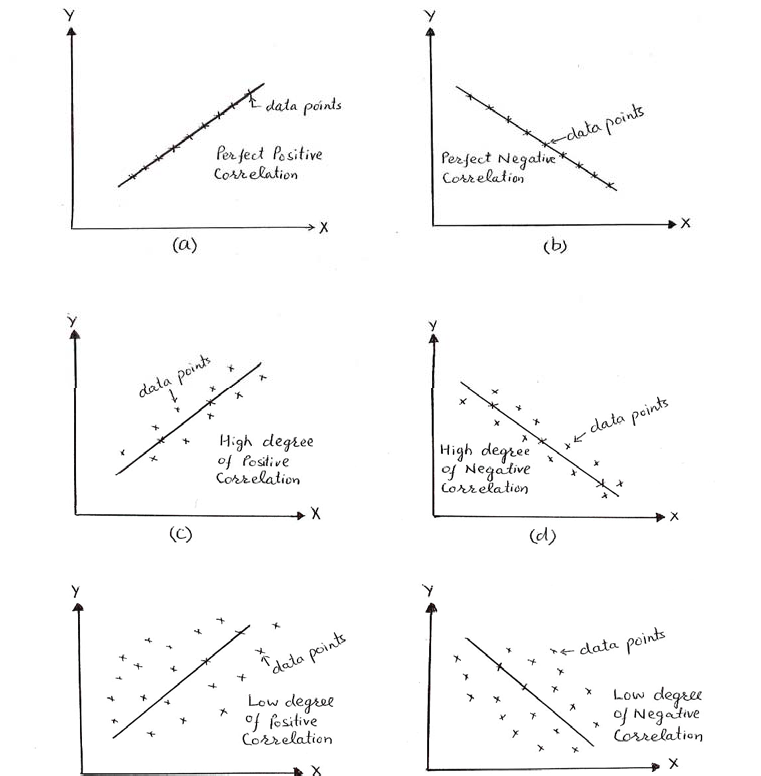 The various diagrams of the scattered data in Figure depict different forms of correlation.

Solution:(a) The Scatter Diagram of the given data is shown in Figure 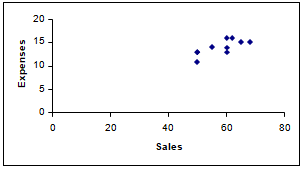 Figure shows that the plotted points are close to each other and reveal an upward So there is a high degree of positive correlation between sales and expenses of the firm.

This method, also known as Correlogram is very simple. The data pertaining to two series are plotted on a graph sheet. We can find out the correlation by examining the direction and closeness of two curves. If both the curves drawn on the graph are moving in the same direction, it is a case of positive correlation. On the other hand, if both the curves are moving in opposite direction, correlation is said to be negative. If the graph does not show any definite pattern on account of erratic fluctuations in the curves, then it shows an absence of correlation.

Find out graphically, if there is any correlation between price yield per plot (qtls); denoted by Y and quantity of fertilizer used (kg); denote by X.

Solution: The Correlogram of the given data is shown in Figure 4-3 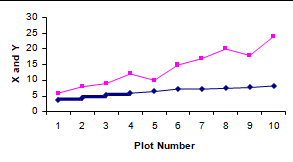 Figure 4-3 shows that the two curves move in the same direction and, moreover, they are very close to each other, suggesting a close relationship between price yield per plot (qtls) and quantity of fertilizer used (kg)

Remark:        Both the Graphic methods - scatter diagram and correlation graph provide a ‘feel for’ of the data – by providing visual representation of the association between the variables. These are readily comprehensible and enable us to form a fairly good, though rough idea of the nature and degree of the relationship between the two variables. However, these methods are unable to quantify the relationship between them. To quantify the extent of correlation, we make use of algebraic methods - which calculate correlation coefficient.

A mathematical method for measuring the intensity or the magnitude of linear relationship between two variables was suggested by Karl Pearson (1867-1936), a great British Biometrician and Statistician and, it is by far the most widely used method in practice.

Karl Pearson’s measure, known as Pearsonian correlation coefficient between two variables X and Y, usually denoted by r(X,Y) or rxy or simply r is a numerical measure of linear relationship between them and is defined as the ratio of the covariance between X and Y, to the product of the standard deviations of X and Y. 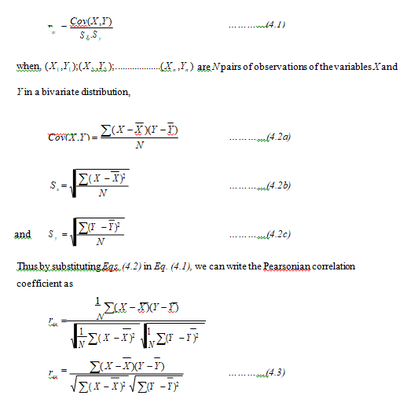 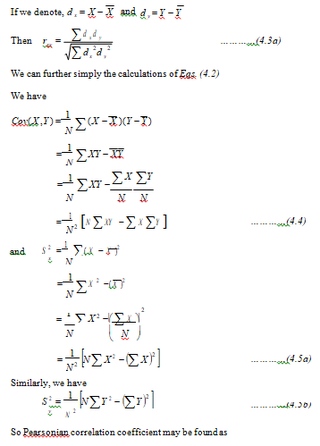 Thus if (i) X and Y are fractional and (ii) X and Y assume large values, the Eq. (4.3) and Eq. (4.6) are not generally used for numerical problems. In such cases, the step deviation method where we take the deviations of the variables X and Y from any arbitrary points is used. We will discuss this method in the properties of correlation coefficient.

The following are important properties of Pearsonian correlation coefficient:

Pearsonian correlation coefficient cannot exceed 1 numerically. In other words it lies between –1 and +1.

Remark: This is one of the very important properties of the correlation coefficient and is extremely helpful in numerical computation of r. We had already stated that Eq. (4.3) and Eq.(4.6) become quite tedious to use in numerical problems if X and/or Y are in fractions or if X and Y are large. In such cases we can conveniently change the origin and scale (if possible) in X or/and Y to get new variables U and V and compute the correlation between U and V by the Eq. (4.7)

If X and Y are independent variables then rxy = 0

However, the converse of the theorem is not true i.e., uncorrelated variables need not necessarily be independent. As an illustration consider the following bivariate distribution.

For this distribution, value of r will be 0.

Remarks: One should not be confused with the words uncorrelation and independence. rxy = 0 i.e., uncorrelation between the variables X and Y simply implies the absence of any linear (straight line) relationship between them. They may, however, be related in some other form other than straight line e.g., quadratic (as we have seen in the above example), logarithmic or trigonometric form.

The signs of both the regression coefficients are the same, and so the value of r will also have the same sign.

This property will be dealt with in detail in the next lesson on Regression Analysis.

Coefficient of determination, which measures the percentage variation in the dependent variable that is accounted for by the independent variable, is a much better and useful measure for interpreting the value of r. This property will also be dealt with in detail in the next lesson.

If r is the observed value of the correlation coefficient in a sample of N pairs of observations for the two variables under consideration, then the Probable Error, denoted by PE (r) is expressed as

There are two main functions of probable error:

The limits of population correlation coefficient are r ± PE(r), implying that if we take another random sample of the size N from the same population, then the observed value of the correlation coefficient in the second sample can be expected to lie within the limits given above, with 0.5 probability. When sample size N is small, the concept or value of PE may lead to wrong conclusions. Hence to use the concept of PE effectively, sample size N it should be fairly large. 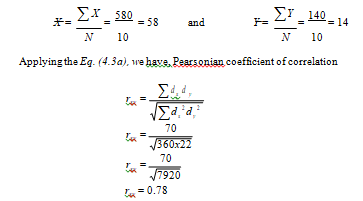 The value of rxy = 0.78 , indicate a high degree of positive correlation between sales and expenses.

The data on price and quantity purchased relating to a commodity for 5 months is given below: 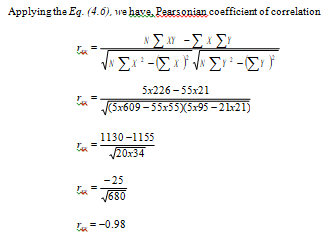 Find the Pearsonian correlation coefficient from the following series of marks obtained by 10 students in a class test in mathematics (X) and in Statistics (Y): 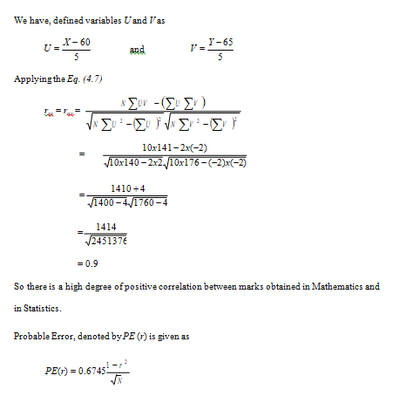 So the value of r is highly significant.

Sometimes we come across statistical series in which the variables under consideration are not capable of quantitative measurement but can be arranged in serial order. This happens when we are dealing with qualitative characteristics (attributes) such as honesty, beauty, character, morality, etc., which cannot be measured quantitatively but can be arranged serially. In such situations Karl Pearson’s coefficient of correlation cannot be used as such. Charles Edward Spearman, a British Psychologist, developed a formula in 1904, which consists in obtaining the correlation coefficient between the ranks of N individuals in the two attributes under study.

Spearman’s rank correlation coefficient, usually denoted by ρ(Rho) is given by the equation

Where d is the difference between the pair of ranks of the same individual in the two characteristics and N is the number of pairs.

Ten entries are submitted for a competition. Three judges study each entry and list the ten in rank order. Their rankings are as follows:

Calculate the appropriate rank correlation to help you answer the following questions:

Calculations for Coefficient of Rank Correlation

Spearman’s rank correlation Eq.(4.8) can also be used even if we are dealing with variables, which are measured quantitatively, i.e. when the actual data but not the ranks relating to two variables are given. In such a case we shall have to convert the data into ranks. The highest (or the smallest) observation is given the rank 1. The next highest (or the next lowest) observation is given rank 2 and so on. It is immaterial in which way (descending or ascending) the ranks are assigned. However, the same approach should be followed for all the variables under consideration.

Calculate the rank coefficient of correlation from the following data: 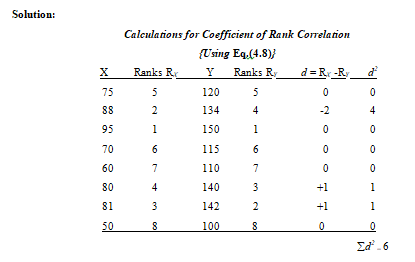 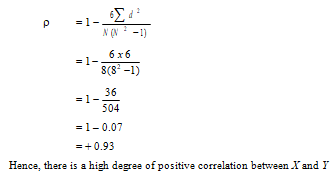 In case of attributes if there is a tie i.e., if any two or more individuals are placed together in any classification w.r.t. an attribute or if in case of variable data there is more than one item with the same value in either or both the series then Spearman’s Eq.(4.8) for calculating the rank correlation coefficient breaks down, since in this case the variables X [the ranks of 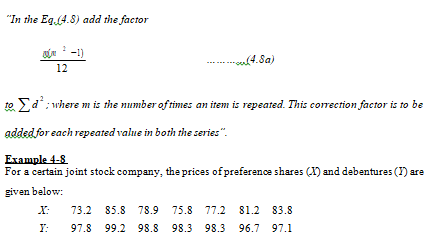 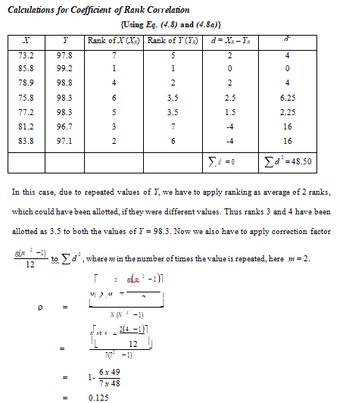 Hence, there is a very low degree of positive correlation, probably no correlation, between preference share prices and debenture prices.

(ii) Coefficient of concurrent deviations is primarily based on the following principle:

“If the short time fluctuations of the time series are positively correlated or in other words, if their deviations are concurrent, their curves would move in the same direction and would indicate positive correlation between them”

Calculate coefficient of correlation by the concurrent deviation method

Calculations for Coefficient of Concurrent Deviations

Coefficient of correlation by the method of concurrent deviations is given by:

Hence there is a fairly good degree of negative correlation between supply and price.