Kurtosis is another measure of the shape of a frequency curve. It is a Greek word, which means bulginess. While skewness signifies the extent of asymmetry, kurtosis measures the degree of peakedness of a frequency distribution. Karl Pearson classified curves into three types on the basis of the shape of their peaks. These are mesokurtic, leptokurtic and platykurtic. These three types of curves are shown in figure below:

It will be seen from Figure that mesokurtic curve is neither too much flattened nor too much peaked. In fact, this is the frequency curve of a normal distribution.

Example 1: From the data given in Example 3.18, calculate the kurtosis. 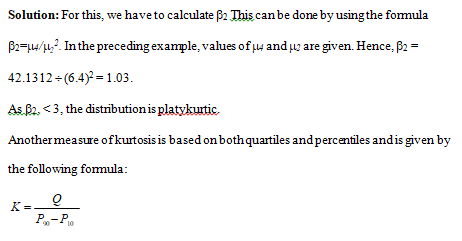 Where K = kurtosis, Q = ½ (Q3 – Q1) is the semi-interquartile range; P90 is 90th percentile and P10 is the 10th percentile. This is also known as the percentile coefficient of kurtosis. In case of the normal distribution, the value of K is 0.263.

Example 2: From the data given below, calculate the percentile coefficient of kurtosis.