Spatial data in GIS represents features that have a known location on the earth.

The method of representing geographic features by the basic graphical elements of points, lines and polygon is said to be the vector method, or vector data model. Vector data represent geographic space that is intuitive and reminiscent of analog maps.

Vector data mostly incorporate the use to topological structure, especially the Arc/Node structure explained below.

Raster data models incorporate the use of a grid-cell data structure where the geographic area is divided into cells identified by row and column. A raster is a tesselation of a surface.• (A tesselation is defined as the process to cover a surface through the repeated use of a single shape.)

What is a raster data?

A raster based system stores data by using a grid of cells. A unique reference coordinate represents each pixel either at a corner or in the middle of the cell. Each cell or pixel has discrete attributes assigned to it

A raster can use any reasonable geometric shape, as long as it can be connected in such a way as to create a continuous surface. 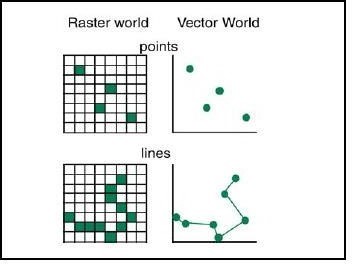 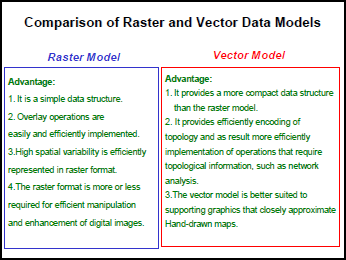 The relational database organizes data in tables. Each table, is identified by a unique table name, and is organized by rows and columns. Each column within a table also has a unique name. Columns store the values for a specific attribute, e.g. cover group, tree height. Rows represent one record in the table. In a GIS each row is usually linked to a separate spatial feature, e.g. a forestry stand. Accordingly, each row would be comprised of several columns, each column containing a specific value for that geographic feature. The following figure presents a sample table for forest inventory features. This table has 4 rows and 5 columns. The forest stand number would be the label for the spatial feature as well as the primary key for the database table. This serves as the linkage between the spatial definition of the feature and the attribute data for the feature. 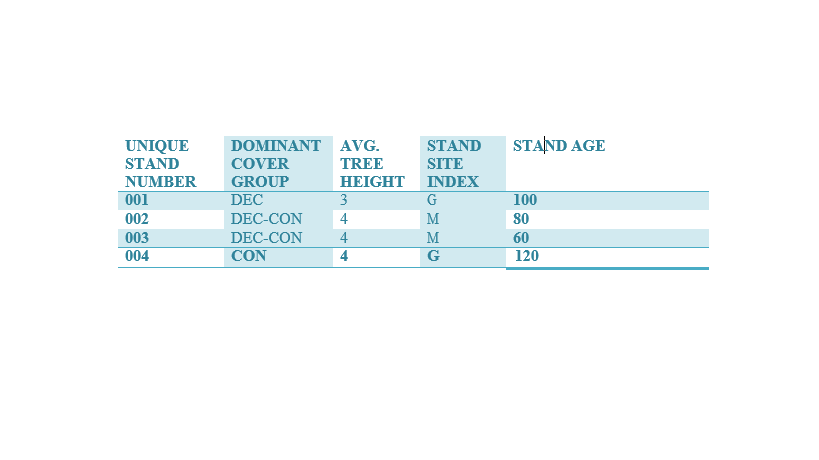 The relational database model is the most widely accepted for managing the attributes of geographic data.

The relational DBMS is attractive because of its: