The most common and least expensive mechanism for error- detection is the simple parity check. In this technique, a redundant bit called parity bit, is appended to every data unit so that the number of 1s in the unit (including the parity becomes even).

An observation of the table reveals that to move from one code word to another, at least two data bits should be changed. Hence these set of code words are said to have a minimum distance (hamming distance) of 2, which means that a receiver that has knowledge of the code word set can detect all single bit errors in each code word. However, if two errors occur in the code word, it becomes another valid member of the set and the decoder will see only another valid code word and know nothing of the error. Thus errors in more than one bit cannot be detected. In fact, it can be shown that a single parity check code can detect only odd number of errors in a code word.

This Cyclic Redundancy Check is the most powerful and easy-to-implement technique. Unlike the checksum scheme, which is based on addition, CRC is based on binary division. In CRC, a sequence of redundant bits, called cyclic redundancy check bits, are appended to the end of the data unit so that the resulting data unit becomes exactly divisible by a second, predetermined binary number. At the destination, the incoming data unit is divided by the same number. If at this step there is no remainder, the data unit is assumed to be correct and is therefore accepted. A remainder indicates that the data unit has been damaged in transit and therefore must be rejected.

The generalized technique can be explained as follows. If a k-bit message is to be transmitted, the transmitter generates an r-bit sequence, known as Frame Check Sequence (FCS) so that the (k+r) bits are actually being transmitted. Now this r-bit FCS is generated by dividing the original number, appended by r zeros, by a predetermined number. This number, which is (r+1) bit in length, can also be considered as the coefficient of a polynomial, called a Generator Polynomial. The remainder of this division process generates the r-bit FCS. On receiving the packet, the receiver divides the (k+r) bit frame by the same predetermined number and if it produces no remainder, it can be assumed that no error has occurred during the transmission. Operations at both the sender and receiver ends are shown in the figure.

This mathematical operation performed is illustrated in the figure by dividing a sample 4- bit number by the coefficient of the generator polynomial x3 +x+1, which is 1011, using the modulo-2 arithmetic. Modulo-2 arithmetic is a binary addition process without any carry-over, which is just the Exclusive-OR operation. Consider the case where k=1101. Hence we have to divide 1101000 (i.e. k appended by 3 zeros) by 1011, which produces the remainder r=001 so that the bit frame (k+r) =1101001 is actually being transmitted through the communication channel. At the receiving end, if the received number, i.e., 1101001 is divided by the same generator polynomial 1011 to get the remainder as 000, it can be assumed that the data is free of errors. 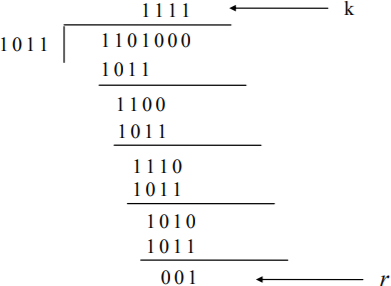 CRC is a very effective error detection technique. If the divisor is chosen according to the previously mentioned rules, its performance can be summarized as follows:

Error Correction can be handled in two ways.