Sampling is the principal factor determining the spatial resolution of an image. Basically, spatial resolution is the smallest discernible detail in an image. Suppose that we construct a chart with vertical lines of width W, with the space between the lines also having width W.A line pair consists of one such line and its adjacent space. Thus, the width of a line pair   is 2W, and there are 1/2Wline pairs per unit distance. A widely used definition of resolution is simply the smallest number of discernible line pairs per unit distance; for example, 100 line pairs per millimeter. Gray- level resolution similarly refers to the smallest discernible change in gray level. We have considerable discretion regarding the number of samples used to generate a digital image, but this is not true for the number of gray levels. Due to hardware considerations, the number of gray levels is usually an integer power of 2.

The most common number is 8 bits, with 16 bits being used in some applications where enhancement of specific gray-level ranges is necessary. Sometimes we find systems that can digitize the gray levels of an image with 10 or 12 bit of accuracy, but these are the exception rather than the rule. When an actual measure of physical resolution relating pixels and the level of detail they resolve in the original scene are not necessary, it is not uncommon to refer to an L- level digital image of size M*N as having a spatial resolution of M*N pixels and a gray-level resolution of L levels.

The subsampling was accomplished by deleting the appropriate number of rows and columns from the original image. For example, the 512*512 image was obtained by deleting every other row and column from the 1024*1024 image. The 256*256 image was generated by deleting every other row and column in the 512*512 image, and so on. The number of allowed   gray levels was kept at 256. These images show the dimensional proportions between various sampling densities, but their size differences make it difficult to see the effects resulting from a reduction in the number of samples. The simplest way to compare these effects is to bring all the subsampled images up to size 1024*1024 by row and column pixel replication. The results are shown in Figs. 7.2 (b) through (f). Figure7.2 (a) is the same 1024*1024, 256-level image shown in Fig.7.1; it is repeated to facilitate comparisons. 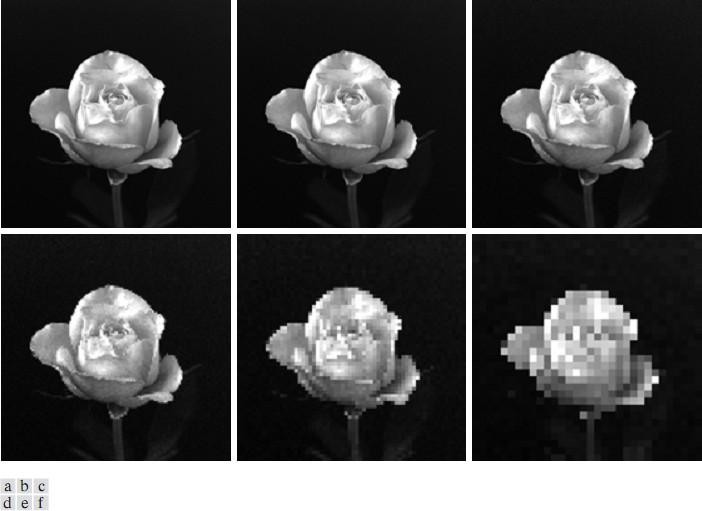 Compare Fig. 7.2(a) with the 512*512 image in Fig. 7.2(b) and note that it is virtually impossible to tell these two images apart. The level of detail lost is simply too fine to be seen on the printed page at the scale in which these images are shown. Next, the 256*256 image in Fig. 7.2(c) shows a very slight fine checkerboard pattern in the borders between flower petals and the black back- ground. A slightly more pronounced graininess throughout the image also is beginning to appear. These effects are much more visible in the 128*128 image in Fig. 7.2(d), and they become pronounced in the 64*64 and 32*32 images in Figs. 7.2 (e) and (f), respectively.

In the next example, we keep the number of samples constant and reduce the number of gray levels from 256 to 2, in integer powers of 2.Figure 7.3(a) is a 452*374 CAT projection image, displayed with k=8 (256 gray levels). Images such as this are obtained by fixing the X-ray source in one position, thus producing a 2-D image in any desired direction. Projection images are used as guides to set up the parameters for a CAT scanner, including tilt, number of slices, and range. Figures 7.3(b) through (h) were obtained by reducing the number of bits from k=7 to k=1 while keeping the spatial resolution constant at 452*374 pixels. The 256-, 128-, and 64-level images are visually identical for all practical purposes. The 32-level image shown in Fig. 7.3 (d), however, has an almost imperceptible set of very fine ridge like structures in areas of smooth gray levels (particularly in the skull).This effect, caused by the use of an insufficient number of gray levels in smooth areas of a digital image, is called false contouring, so called because the ridges resemble topographic contours in a map. False contouring generally is quite visible in images displayed using 16 or less uniformly spaced gray levels, as the images in Figs. 7.3(e) through (h) show. 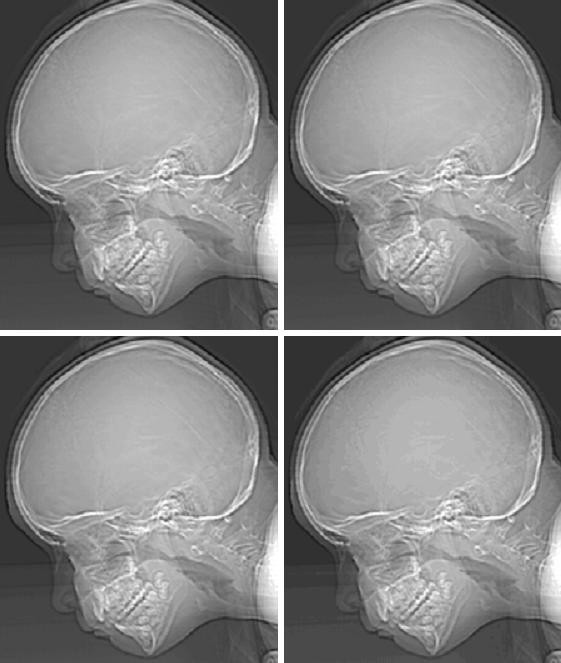 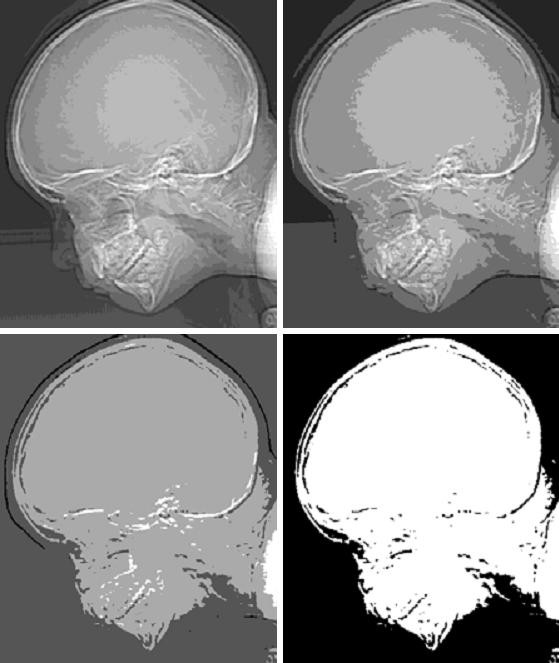 As a very rough rule of thumb, and assuming powers of 2 for convenience, images of size 256*256 pixels and 64 gray levels are about the smallest images that can be expected to be reasonably free of objectionable sampling checker-boards and false contouring.

The results in Examples 7.2 and 7.3 illustrate the effects produced on image quality by varying N and k independently. However, these results only partially answer the question of how varying N and k affect images because we have not considered yet any relationships that might exist between these two parameters.

An early study by Huang [1965] attempted to quantify experimentally the effects on   image quality produced by varying N and k simultaneously. The experiment consisted of a set of subjective tests. Images similar to those shown in Fig.7.4 were used. The woman’s face is representative of an image with relatively little detail; the picture of the cameraman contains an intermediate amount of detail; and the crowd picture contains, by comparison, a large amount of detail. Sets of these three types of images were generated by varying N and k, and observers were then asked to rank them according to their subjective quality. Results were summarized in the form of so-called isopreference curves in the Nk-plane (Fig.7.5 shows average isopreference curves representative of curves corresponding to the images shown in Fig. 7.4).Each point in the Nk-plane represents an image having values of N and k equal to the coordinates of that point.

Points lying on an isopreference curve correspond to images of equal subjective quality. It was found in the course of the experiments that the isopreference curves tended to shift right and upward, but their shapes in each of the three image categories were similar to those shown in

Fig. 7.5. This is not unexpected, since a shift up and right in the curves simply means larger values for N and k, which implies better picture quality. 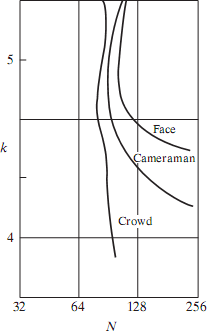 Fig.7.5. Representative isopreference curves for the three types of images in Fig.7.4

The key point of interest in the context of the present discussion is that isopreference curves tend to become more vertical as the detail in the image increases. This result suggests that for images with a large amount of detail only a few gray levels may be needed. For example, the isopreference curve in Fig.7.5 corresponding to the crowd is nearly   vertical. This indicates that, for a fixed value of N, the perceived quality for this type of image is nearly independent of the number of gray levels used. It is also of interest to note that perceived quality in the other two image categories remained the same in some intervals in which the spatial resolution was increased, but the number of gray levels actually decreased. The most likely reason for this result is that a decrease in k tends to increase the apparent contrast of an image, a visual effect that humans often perceive as improved quality in an image.