Imaging factors such as uneven illumination can transform a perfectly segmentable histogram into a histogram that cannot be partitioned effectively by a single global threshold. An approach for handling such a situation is to divide the original image into subimages and then utilize a

different threshold to segment each subimage. The key issues in this approach are how to subdivide the image and how to estimate the threshold for each resulting subimage. Since the threshold used for each pixel depends on the location of the pixel in terms of the subimages, this type of thresholding is adaptive. 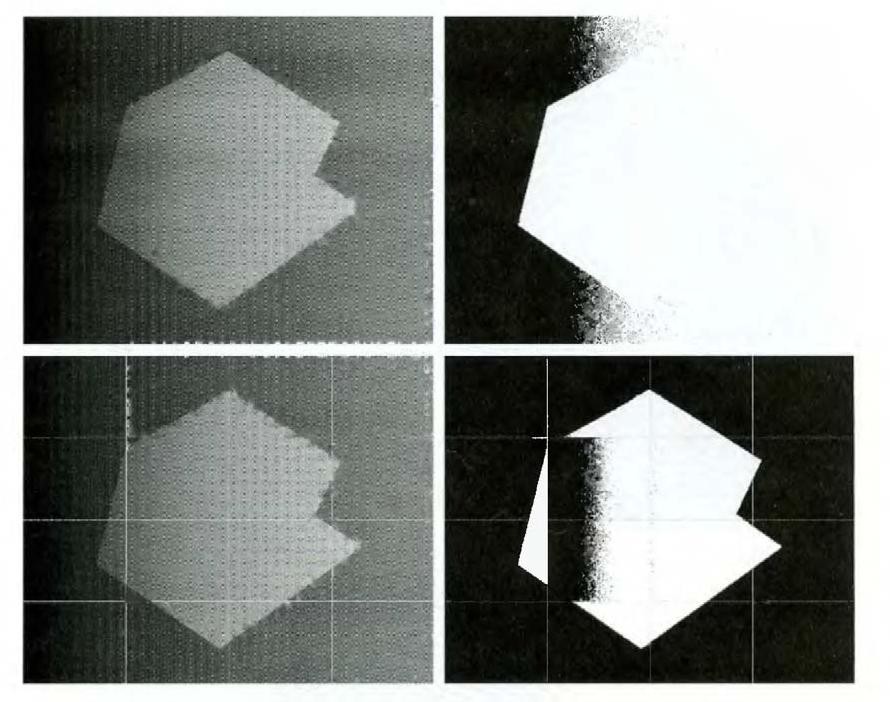 We illustrate adaptive thresholding with a example. Figure 5(a) shows the image, which we concluded could not be thresholded effectively with a single global threshold. In fact, Fig. 5(b) shows the result of thresholding the image with a global threshold manually placed in the valley of its histogram. One approach to reduce the effect of nonuniform illumination is to subdivide the image into smaller subimages, such that the illumination of each subimage is approximately uniform. Figure 5(c) shows such a partition, obtained by subdividing the image into four equal parts, and then subdividing each part by four again. All the subimages that did not contain a boundary between object and back-ground had variances of less than 75. All subimages containing boundaries had variances in excess of 100. Each subimage with variance greater than

100 was segmented with a threshold computed for that subimage using the algorithm. The initial

value for T in each case was selected as the point midway between the minimum and maximum gray levels in the subimage. All subimages with variance less than 100 were treated as one composite image, which was segmented using a single threshold estimated using the same algorithm. The result of segmentation using this procedure is shown in Fig. 5(d).

With the exception of two subimages, the improvement over Fig. 5(b) is evident. The boundary between object and background in each of the improperly segmented subimages was small and dark, and the resulting histogram was almost unimodal.