What is histogram of a digital image. Explain how histogram is useful in image enhancement?

for k=0,1,…… .,L-1. Loosely speaking, p(rk) gives an estimate of the probability of occurrence of gray level rk. Note that the sum of all components of a normalized histogram is equal to 1.

Histograms are the basis for numerous spatial domain processing techniques. Histogram manipulation can be used effectively for image enhancement. Histograms are simple to calculate in software and also lend themselves to economic hardware implementations, thus   making   them a popular tool for real-time image processing.

As an introduction to the role of histogram processing in image enhancement, consider Fig. 3, which is the pollen image shown in four basic gray-level characteristics: dark, light, low contrast, and high contrast. The right side of the figure shows the histograms corresponding to   these images. The horizontal axis of each histogram plot corresponds to gray level values, rk. 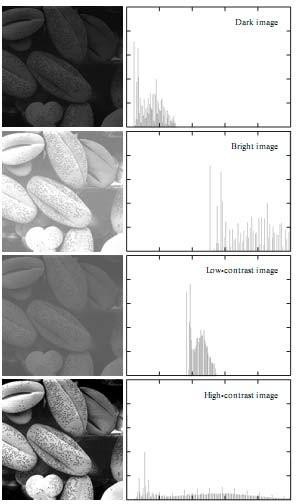 Finally, we see that the components of the histogram in the high-contrast image cover a broad range of the gray scale and, further, that the distribution of pixels is not too far from uniform, with very few vertical lines being much higher than the others.

Intuitively, it is reasonable to conclude that an image whose pixels tend to occupy the entire range of possible gray levels and, in addition, tend to be distributed uniformly, will have an appearance of high contrast and will exhibit a large variety of gray tones.

The net effect will be an image that shows a great deal of gray-level detail and has high dynamic range. It will be shown shortly that it is possible to develop a transformation function that can automatically achieve this effect, based only on information available in the histogram of the input image.