Let (X, Y, Z) be the world coordinates of any point in a 3-D scene, as shown in the Fig. 10. We assume throughout the following discussion that Z> λ; that is all points of interest lie in front of the lens. The first step is to obtain a relationship that gives the coordinates (x, y) of the projection of the point (X. Y, Z) onto the image plane. This is easily accomplished by the use of similar triangles. With reference to Fig. 10, 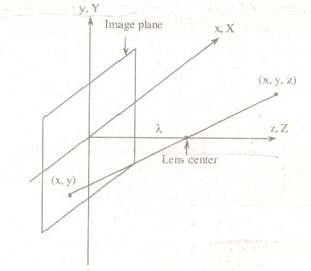