What is the objective of image enhancement. Define spatial domain. Define point processing.

where f(x, y) is the input image, g(x, y) is the processed image, and T is an operator on f, defined over some neighborhood of (x, y). In addition,T can operate on a set of input images, such as performing the pixel-by-pixel sum of K images for noise reduction.

The principal approach in defining a neighborhood about a point (x, y) is to use a square or rectangular subimage area centered at (x, y), as Fig.2.1 shows. The center of the subimage is moved from pixel to pixel starting, say, at the top left corner. The operator T is applied at each location (x, y) to yield the output, g, at that location.The process utilizes only the pixels in the area of the image spanned by the neighborhood. 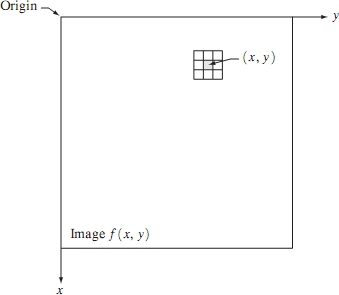 Although other neighborhood shapes, such as approximations to a circle, sometimes are used, square and rectangular arrays are by far the most predominant because of their ease of implementation. The simplest form of T is when the neighborhood is of size 1*1 (that is, a single pixel). In this case, g depends only on the value of f at (x, y), and T becomes a gray-level (also called an intensity or mapping) transformation function of the form

where, for simplicity in notation, r and s are variables denoting, respectively, the gray level of f(x, y) and g(x, y) at any point (x, y). For example, if T(r) has the form shown in Fig. 2.2(a), the effect of this transformation would be to produce an image of higher contrast than the original by darkening the levels below m and brightening the levels above m in the original image. In this technique, known as contrast stretching, the values of r below m are compressed by the transformation function into a narrow range of s, toward black.The opposite effect takes place for values of r above m. In the limiting case shown in Fig. 2.2(b), T(r) produces a two-level (binary) image. A mapping of this form is called a thresholding function. Some fairly simple, yet powerful, processing approaches can be formulated with gray-level transformations. Because enhancement at any point in an image depends only on the gray level at that point, techniques in this category often are referred to as point processing.

Larger neighborhoods allow considerably more flexibility. The general approach is to use a function of the values of f in a predefined neighborhood of (x, y) to determine the value of g at (x, y).One of the principal approaches in this formulation is based on the use of so-called masks

(also referred to as filters, kernels, templates, or windows). Basically, a mask is a small (say, 3*3) 2-D array, such as the one shown in Fig. 2.1, in which the values of the mask coefficients determine the nature of the process, such as image sharpening.