Explain about elements of visual perception.

Although the digital image processing field is built on a foundation of mathematical and probabilistic formulations, human intuition and analysis play a central role in the choice of one technique versus another, and this choice often is made based on subjective, visual judgments.

Figure 4.1 shows a simplified horizontal cross section of the human eye. The eye is nearly a sphere, with an average diameter of approximately 20 mm. Three   membranes enclose the   eye: the cornea and sclera outer cover; the choroid; and the retina. The cornea is a tough, transparent tissue that covers the anterior surface of the eye. Continuous with the cornea, the sclera is an opaque membrane that encloses the remainder of the optic globe. The choroid lies directly below the sclera. This membrane contains a network of blood vessels that serve as the major source of nutrition to the eye. Even superficial injury to the choroid, often not deemed serious, can lead to severe eye damage as a result of inflammation that restricts blood flow. The choroid coat is heavily pigmented and hence helps to reduce the amount of extraneous light entering the eye and the backscatter within the optical globe. At its anterior extreme, the choroid is divided into the ciliary body and the iris diaphragm. The latter contracts or expands to control the amount of light that enters the eye. The central opening of the iris (the pupil) varies in diameter from approximately 2 to 8 mm. The front of the iris contains the visible pigment of the eye, whereas the back contains a black pigment.

The lens is made up of concentric layers of fibrous cells and is suspended by fibers that attach to the ciliary body. It contains 60 to 70%water, about 6%fat, and more protein than any other tissue in the eye. The lens is colored by a slightly yellow pigmentation that increases with age. In extreme cases, excessive clouding of the lens, caused by the affliction commonly referred to as cataracts, can lead to poor color discrimination and loss of clear vision. The lens absorbs approximately 8% of the visible light spectrum, with relatively higher absorption at shorter wavelengths. Both infrared and ultraviolet light are absorbed appreciably by proteins within the lens structure and, in excessive amounts, can damage the eye. 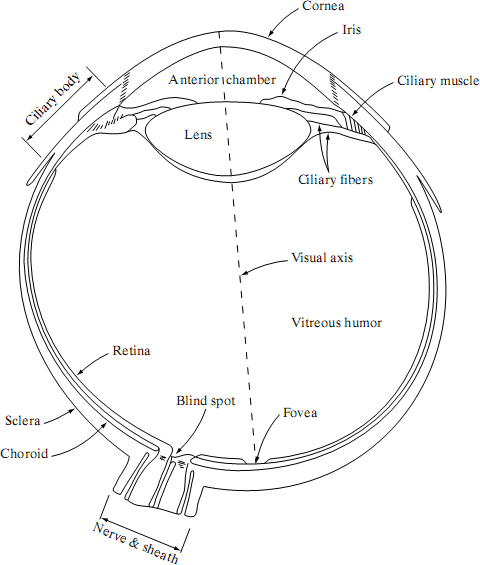 Fig.4.1 Simplified diagram of a cross section of the human eye.

The innermost membrane of the eye is the retina, which lines the inside of the wall’s entire posterior portion. When the eye is properly focused, light from an object outside the eye is imaged on the retina. Pattern vision is afforded by the distribution of discrete light receptors over the surface of the retina. There are two classes of receptors: cones and rods. The cones in each eye number between 6 and 7 million. They are located primarily in the central portion of the

retina, called the fovea, and are highly sensitive to color. Humans can resolve fine details with these cones largely because each one is connected to its own nerve end. Muscles controlling the eye rotate the eyeball until the image of an object of interest falls on the fovea. Cone vision is called photopic or bright-light vision. The number of rods is much larger: Some   75   to 150 million are distributed over the retinal surface. The larger area of distribution and the fact that several rods are connected to a single nerve end reduce the amount of detail discernible by these receptors. Rods serve to give a general, overall picture of the field of view. They are not involved in color vision and are sensitive to low levels of illumination. For example, objects that appear brightly colored in daylight when seen by moonlight appear as colorless forms because only the rods are stimulated. This phenomenon is known as scotopic or dim-light vision.

The principal difference between the lens of the eye and an ordinary optical lens is   that the former is flexible. As illustrated in Fig. 4.1, the radius of curvature of the anterior surface of the lens is greater than the radius of its posterior surface. The shape of the lens is controlled by tension in the fibers of the ciliary body. To focus on distant objects, the controlling   muscles cause the lens to be relatively flattened. Similarly, these muscles allow the lens to   become thicker in order to focus on objects near the eye. The distance between the center of the lens and the retina (called the focal length) varies from approximately 17 mm to about 14 mm, as the refractive power of the lens increases from its minimum to its maximum. When the eye

Fig.4.2. Graphical representation of the eye looking at a palm tree Point C is the optical center of the lens.

focuses on an object farther away than about 3 m, the lens exhibits its lowest refractive power. When the eye focuses on a nearby object, the lens is most strongly refractive. This information

makes it easy to calculate the size of the retinal image of any object. In Fig. 4.2, for example, the observer is looking at a tree 15 m high at a distance of 100 m. If h is the height in mm of that object in the retinal image, the geometry of Fig.4.2 yields 15/100=h/17 or h=2.55mm. The retinal image is reflected primarily in the area of the fovea. Perception then takes place by the relative excitation of light receptors, which transform radiant energy into electrical impulses that are ultimately decoded by the brain.

Because digital images are displayed as a discrete set of intensities, the eye’s ability to discriminate between different intensity levels is an important consideration in presenting image- processing results. The range of light intensity levels to which the human visual system can adapt is enormous—on the order of 1010—from the scotopic threshold to the glare limit. Experimental evidence indicates that subjective brightness (intensity as perceived by the human visual system) is a logarithmic function of the light intensity incident on the eye. Figure 4.3, a plot of light intensity versus subjective brightness, illustrates this characteristic. The long solid curve represents the range of intensities to which the visual system can adapt. In photopic vision alone, the range is about 106. The transition from scotopic to photopic vision is gradual over the approximate range from 0.001 to 0.1 millilambert (–3 to –1 mL in the log scale), as the double branches of the adaptation curve in this range show. 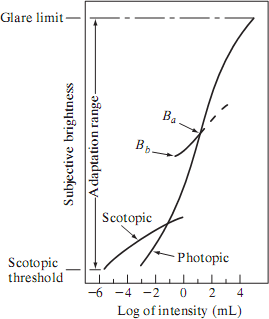 The essential point in interpreting the impressive dynamic range depicted in Fig.4.3 is that the visual system cannot operate over such a range simultaneously. Rather, it accomplishes this large variation by changes in its overall sensitivity, a phenomenon known as brightness adaptation. The total range of distinct intensity levels it can discriminate simultaneously is rather small when compared with the total adaptation range. For any given set of conditions, the current sensitivity level of the visual system is called the brightness adaptation level, which may correspond, for example, to brightness Ba in Fig. 4.3. The short intersecting curve represents the range of subjective brightness that the eye can perceive when adapted to this level. This range is rather restricted, having a level Bb at and below which all stimuli are perceived as indistinguishable blacks. The upper (dashed) portion of the curve is not actually restricted but, if extended too far, loses its meaning because much higher intensities would simply raise the adaptation level higher than Ba.

56. Explain the process of image acquisition.