Explain LZW coding with an example.

The technique, called Lempel-Ziv-Welch (LZW) coding, assigns fixed-length code words to variable length sequences of source symbols but requires no a priori knowledge of the probability of occurrence of the symbols to be encoded. LZW compression has been integrated into a variety of mainstream imaging file formats, including the graphic interchange   format (GIF), tagged image file format (TIFF), and the portable document format (PDF).

LZW coding is conceptually very simple (Welch [1984]). At the onset of the coding process, a codebook or "dictionary" containing the source symbols to be coded is constructed. For 8-bit monochrome images, the first 256 words of the dictionary are assigned to the gray values 0, 1, 2..., and 255. As the encoder sequentially examines the image's pixels, gray- level sequences that are not in the dictionary are placed in algorithmically determined (e.g., the next unused) locations. If the first two pixels of the image are white, for instance, sequence ―255- 255‖ might be assigned to location 256, the address following the locations reserved for gray levels 0 through 255. The next time that two consecutive white pixels are encountered, code word 256, the address of the location containing sequence 255-255, is used to represent them. If a 9-bit, 512-word dictionary is employed in the coding process, the original (8 + 8) bits that were used to represent the two pixels are replaced by a single 9-bit code word. Cleary, the size of the

dictionary is an important system parameter. If it is too small, the detection of matching gray- level sequences will be less likely; if it is too large, the size of the code words will adversely affect compression performance.

Consider the following 4 x 4, 8-bit image of a vertical edge:

Table 6.1 details the steps involved in coding its 16 pixels. A 512-word dictionary with the following starting content is assumed: 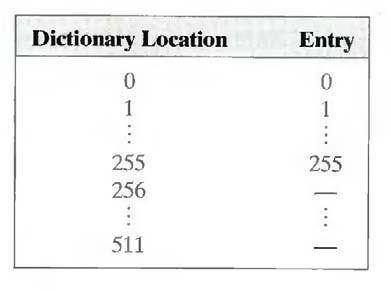 Locations 256 through 511 are initially unused. The image is encoded by processing its pixels in a left-to-right, top-to-bottom manner. Each successive gray-level value is concatenated with a variable—column 1 of Table 6.1 —called the "currently recognized sequence." As can be seen, this variable is initially null or empty. The dictionary is searched for each concatenated sequence and if found, as was the case in the first row of the table, is replaced by the newly concatenated and recognized (i.e., located in the dictionary) sequence. This was done in column 1 of row 2. 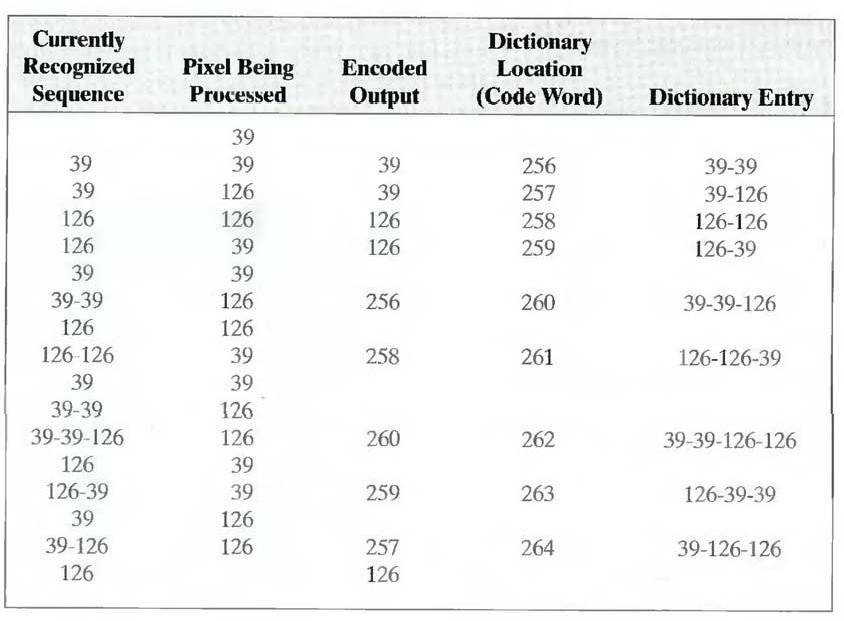 A unique feature of the LZW coding just demonstrated is that the coding dictionary or code book is created while the data are being encoded. Remarkably, an LZW decoder builds an identical decompression dictionary as it decodes simultaneously the encoded data stream. . Although not needed in this example, most practical applications require a strategy for handling dictionary overflow. A simple solution is to flush or reinitialize the dictionary when it becomes full and continue coding with a new initialized dictionary. A more complex option is

to monitor compression performance and flush the dictionary when it becomes poor or unacceptable. Alternately, the least used dictionary entries can be tracked and replaced when necessary.

7. Explain a method of generating variable length codes with an example.

10. What is image compression. Explain about the redundancies in a digital image.

11. Explain about region based segmentation.

12. Explain in detail the threshold selection based on boundary characteristics.