The following are among the most common PDFs found in image processing applications.

Because of its mathematical tractability in both the spatial and frequency domains, Gaussian (also called normal) noise models are used frequently in practice. In fact, this tractability is so convenient that it often results in Gaussian models being used in situations in which they are marginally applicable at best.

The PDF of a Gaussian random variable, z, is given by

The PDF of Rayleigh noise is given by

The mean and variance of this density are given by

Figure 5.10 shows a plot of the Rayleigh density. Note the displacement from the origin and the fact that the basic shape of this density is skewed to the right. The Rayleigh density can be quite useful for approximating skewed histograms.

The PDF of Erlang noise is given by

where the parameters are such that a > 0, b is a positive integer, and "!" indicates factorial. The mean and variance of this density are given by

The PDF of exponential noise is given by

The mean of this density function is given by

This PDF is a special case of the Erlang PDF, with b = 1.

The PDF of uniform noise is given by

The mean of this density function is given by

The PDF of (bipolar) impulse noise is given by

If b > a, gray-level b will appear as a light dot in the image. Conversely, level a will appear like a dark dot. If either Pa or Pb is zero, the impulse noise is called unipolar. If neither probability is zero, and especially if they are approximately equal, impulse noise values will resemble salt-and-pepper granules randomly distributed over the image. For this reason, bipolar impulse noise also is called salt-and-pepper noise. Shot and spike noise also are terms used to refer to this type of noise. 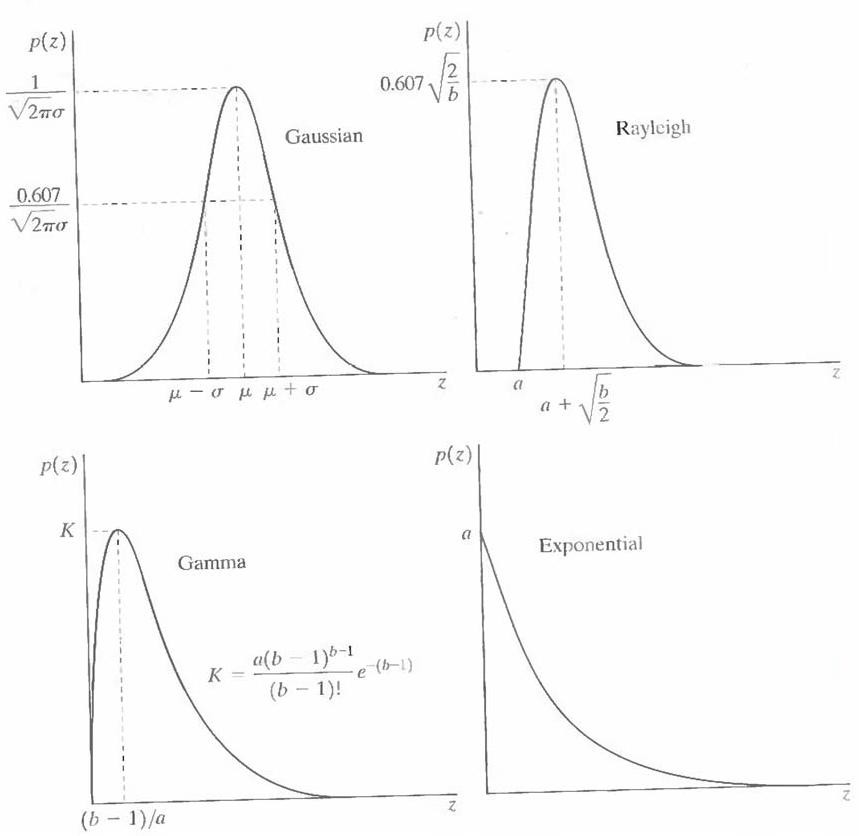